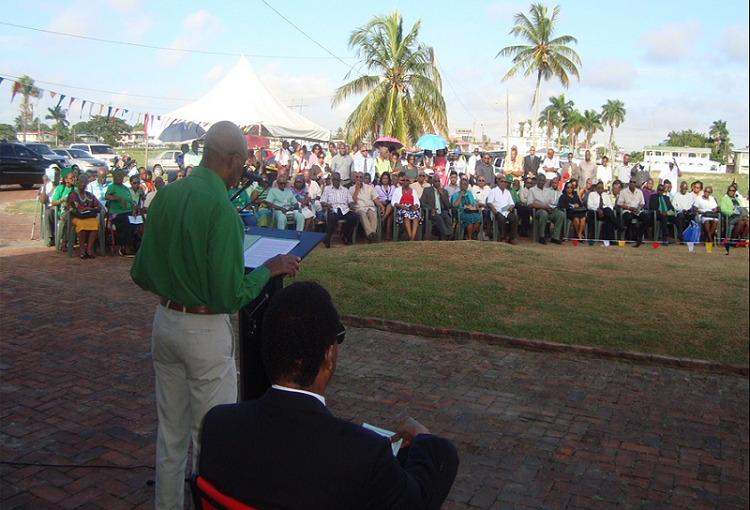 Address of Brigadier David Granger, Leader, on the 58th Anniversary of the founding of the Peopleâ€™s National Congress Reform on Monday 5th October 2015

Comrade Forbes Burnham, our founder-leader, together with Comrade Joseph Prayag Lachmansingh, our founder-chairman, established the Peopleâ€™s National Congress fifty-eight years ago on the fifth of October 1957. We are the beneficiaries of their vision. We shall never forget their service to our party and their love for our country.

The PNC was elected to office in December 1964 as a member of a coalition administration. The PNCR today, as part of a grand coalition of six parties, has the opportunity to serve, to give guidance, to provide leadership and to contribute to the development of Guyana once again.

The PNCR today celebrates the 58th anniversary of its founding by recalling our founderâ€™s deep commitment to creating the conditions to allow our country to co-exist peacefully with its neighbours in the Caribbean and on our borders on the continent of South America.

Our founder embarked, immediately on our partyâ€™s formation, on the task of building cordial, peaceful and respectful relations with Guyanaâ€™s neighbours in order to create a secure and stable international environment.

Our founder, even in opposition, initiated a motion in the Legislative Assembly in 1958 calling for British Guiana to become a member of the West Indies Federation in 1958.

Our founder, years later, even before Guyana achieved Independence in May 1966, travelled to Bridgetown Barbados, to pioneer the restart of the regional integration movement by the establishment of the Caribbean Free Trade Area (CARIFTA). This led to the creation of the Caribbean Community (CARICOM).

Our founder, even before achieving Independence, travelled to Paramaribo, Suriname to seek a solution to that countryâ€™s objectionable claim on our territory.

Our founder, even before achieving Independence, hammered out an agreement to establish the Guyana-Venezuela Mixed Commission to seek a solution to Venezuelaâ€™s obnoxious claim to our territory.

Our founder travelled later in his career to Brasilia, Caracas and Paramaribo in an unending effort to build friendly relations with our neighbours.

The PNCR has never forgotten its duty to actualise the vision of our nationâ€™s founders by continuing their work to live in peace with our neighbours, to safeguard our territory, to protect our people and to provide â€˜â€¦a good life for all.â€™

Our people today want to live in peace and safety.

The PNCR made a contract with this nation 58 years ago. We are the heirs and executors of that contract. We have a duty to make Guyana a peaceful and prosperous country for posterity to inherit.

The PNCR today, on its 58th anniversary, renews its commitment to continue to work through A Partnership for National Unity + the Alliance For Change Coalition to remove all obstacles to regional peace and stability.

The PNCR will never surrender its struggle to make this region â€˜a zone of peace.â€™

The PNCR will never resile from its duty to work with any nation or international organization in order to achieve the ideal of forging greater integration and cooperation among all the people of this hemisphere.

The PNCR rejects the invented territorial claims by Venezuela and Suriname. Their expansionist ambitions cannot be allowed to undermine the tenets of international law and unravel borders which have been undisturbed for decades.