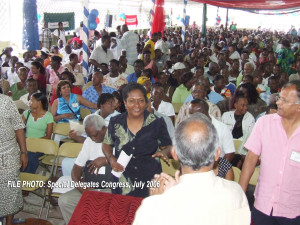 The supreme authority of the Party shall be the Biennial Delegates Congress, which shall be held at such time and place every two (2) years as the General Council or the Central Executive Committee may decide. For the avoidance of doubt, the supremacy of the Congress means that the Congress has the right to review or to order a review of and decision taken by any other forum, organ or committee of the Party.

The General Secretary may accredit as observers at Congress, any number of persons (whether members or not) he may consider expedient.

The Biennial Delegates Congress shall elect the Party Leader, Chairman, Vice Chairman and fifteen (15) other members, who shall become the elected members of the Central Executive Committee.

A Special delegates Congress may be summoned by the Central Executive Committee on its own motion or on the written request of two-thirds of the total number of functioning groups or members within the Party, which Congress shall have all the powers of a Biennial Congress.