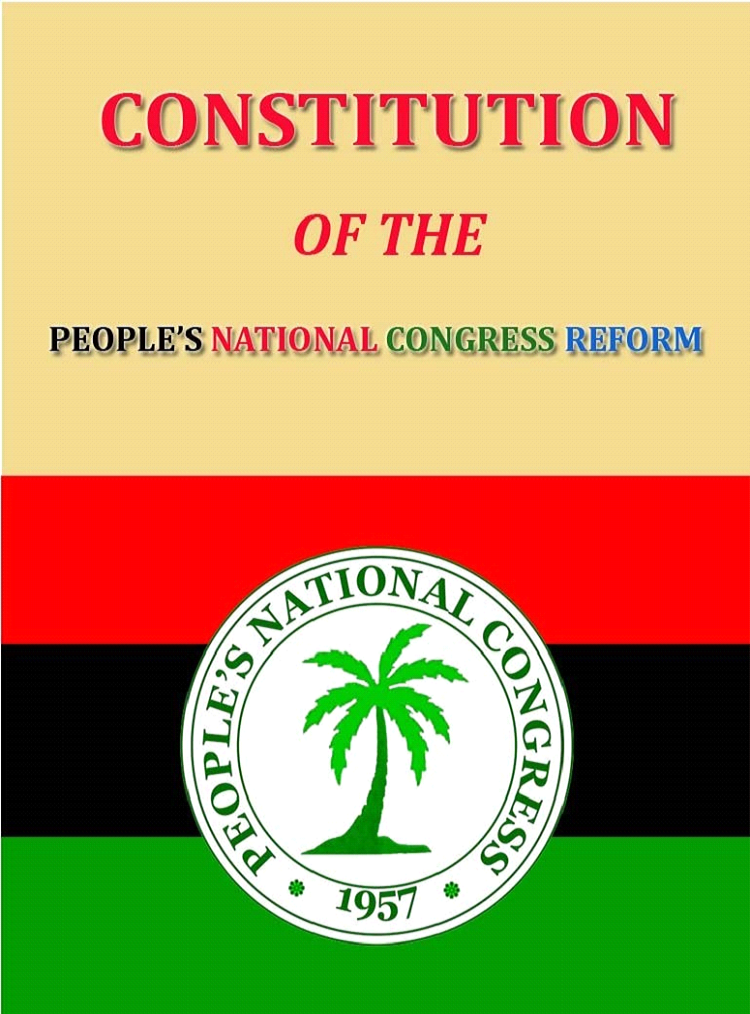 OF THE
PEOPLEâ€™S NATIONAL CONGRESS

This Constitution was unanimously approved at the 10th Biennial Congress of the Party held at Congress Place, Sophia, Georgetown, Guyana from April 29th to May 1st, 1994

The Objects of the Party shall be:

Every member shall take a pledge of fidelity to the Party in the form prescribed by the General Council.

Each applicant for membership must:

MEMBERSHIP TO CEASE ON NONâ€PAYMENT OF FEES AND SUBSCRIPTIONS

7. Â Â  CONTROL AND MANAGEMENT OF FINANCES AND ASSETS

Area within which Membership May be Exercised.

Disputes In or Between Groups

Power of Groups to Remove Their Officers

Party Regions and their Subâ€Divisions

Each Sub-Divisional Committee shall be constituted as follows:

LOSS OF MEMBERSHIP FOR ABSENCE

Functions and Duties of the General Council

For the avoidance of doubt, The General Secretary, The Chairman, the Vice Chairman and the Treasurer shall be members of the Central Executive Committee.

It shall be the duty of the Leader and general Secretary to keep the Central Executive Committee and General Council regularly informed of all developments within the Party.

19. Â Â  FUNCTIONS AND DUTIES OF THE LEADER

Vacancy in office of Leader

If the office of the Leader becomes vacant and congress is scheduled to be held within sixty (60) days, the Congress shall elect a new Leader.

The Chairman of every other disciplinary authority shall submit to the General Secretary, as promptly as possible, a report of the result of every disciplinary matter premises dispute inquired into and adjudicated upon by the Committee

Form of Notice of Appeal

Appeals to be dealt with Promptly

Duty of Disciplinary Authority to Ascertain the Truth

Sports and Other Organisations

I Pledge myself to honour always
The Flag of Guyana
And to be loyal to my country,
To be obedient to the Laws of Guyana,
To love my fellow citizens
And to dedicate my energies
Towards the happiness
And prosperity of Guyana.

Dear Land of Guyana
Of rivers and plains
Made rich by the sunshine
And lush by the rains
Set gem-like and fair
Between mountains and seas
Your children salute you,
Dear land of the free.

Green Land of Guyana
Our heroes of yore
Both bondsmen and free,
Laid their bones on your shore;
This soil so they hallowed,
And from them are we,
All sons of one mother,
Guyana the free.

Great Land of Guyana
Diverse through our strains,
We are born of their sacrifice,
Heirs of their pains,
And ours is the glory
Their eyes did not see â€“
One land of six people,
United and free.

Dear Land of Guyana
To you will we give
Our homage, our service,
Each day that we live;
God guard you, great Mother
And make us to be
More worthy our heritage
Land of the Free.

PARTY BATTLE SONG
Out of ages of oppression
Independent now we stand
Newly born again, victorious
Reigning masters of our land:
On the peak of Mount Roraima
Or beneath the rising sun;
From the mark of Pointa Playa
To where eastern currents run
All were given liberty
By the might of the P.N.C.

Hold the line of battle, Comrades,
Link our arms in unity,
Organise and charge the forces
Of the haughty enemy!
Truth shall be our martial weapon
Brotherhood our armour plate
Guyanese the breed weâ€™ll cherish
Scorning paths of racial hate:
From field and office, factory
Rally to the P.N.C.

Sons of many lands and daughters
Of the continent of Earth!
P.N.C. lifts up the banner
Of your precious Human worth
All who labour are our Comrades
All who suffer kith and kin
Go to mountain, field and factory
Go out brother, bring them in
From field and office, factory
Rally to the P.N.C.

Sacred is our labour, brother
Honourable rings our toil
In the factory, in the office,
Winning riches from the soil:
Honourable is our warfare
Crush the monster Poverty!
On to economic freedom
In a great economy
From field and office, factory
Rally to the P.N.C.

The following amendments shall be made to the Party Constitution:

Rule 2:(1)(a)
To secure the implementation and recognition of a Shared Governance system at all levels
of Government.

Rule 3:(1)(c)
Honorary Membership, this category of Membership may be conferred by the Central
Executive Committee or by the Leader at his discretion.

Rule 14 (2) (a)
The Party Leader shall appoint the General Secretary from among Party Members including
the members of the Central Executive Committee as provided for under Rule 17 (1) (c).

Rule 14: (2) (c)
The Party Leader may in consultation with the Central Executive Committee, also appoint
such number of Principal Political Secretaries/Directors, as approved by the General
Council, to whom he may assign specific duties.

Rule 14: (2) (d)
The Party Leader may in his direction also appoint such number of persons to serve as his
advisers.

Rule 14: (3)
The Party Leader may in consultation with the Central Executive Committee, prescribe that
all or certain designated Party Officers, shall be full-time functionaries of the Party.

Rule 15: (4)
The Biennial Delegates Congress shall elect the Leader, the Chairperson, two (2) Vice
Chairpersons, Treasurer and fifteen (15) other members, who shall become the elected members of the Central Executive Committee.

Rule 17: (1) (e)
The Chairperson and one other elected representative of the Guyana Youth & Student
Movement (GYSM) and the Chairperson of the National Congress of Women (NCW) except that if a Chairperson is elected in his/her own right by Congress, then the Executive of the body concerned shall elect its nominee.