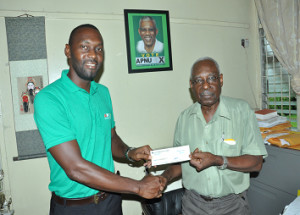 Mr. Christopher Jones (left) hand a cheque over to the General Secretary of the Party, Mr. Oscar Clarke.

The money forms part of the youth movementâ€™s congress purse to the partyâ€™s Biennial congress slated for July 25 to 27, 2014. Mr. Jones who is currently the National Chairman served two terms at the helm of the youth arm first acting and then elected in the substantive post in 2012.

Mr. Jones joined the ranks of the movement in 1999. The GYSM Constitution mandates persons to exercise membership from age 14 to 35 with no upper limit; Mr. Jones will reach this age in December of 2014.